It's gotten a little hectic lately, but I continued to work on the game in every spare moment I get.
Since the last update I have finished tiling the first large sewer area and began work on a puzzlette in that room - it's a simple "flip switch to turn on machinery, then use special moves to get through a set of smashers" kind of deal. The machinery graphics aren't done yet, though the preliminary smashers are already in the game. 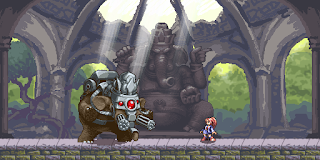 Additionally, I have worked on visually distinguishing the first boss arena - I think I'm moving in the right direction with this.
Posted by DarkFalzX at 6:52 AM