A small update for the sake of updating. 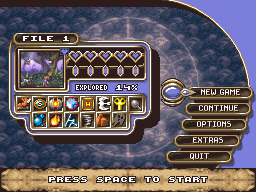 Free time has been ridiculously sparse lately, and I didn't even have my daily commutes to fall back on last week. I am getting closer and closer to finishing the *first* boss fight, but somehow the closer I get - more and more tiny new details become vital to address. As of right now - the whole battle is playeble from start to finish, although I'm not sure just how well, since I didn't have anyone other than myself play it yet. Things I still need to add are a more spectacular boss death effect, better boss announcement, ability to punch the boss into non-vital parts with "ineffective" message popping up, tweak the bosses punch range - it's a bit too short, a powerup drop after the boss is defeated, a finished power-up-get animation and effect, and more and better sound effects - but that's pretty true of the game on the whole. I need to start working on the event flag and save systems, so the boss battle and puzzles don't reset every time I leave a room, as it's becoming annoying.
Also started working on a new "cave" tileset - hopefully this will turn out pretty.
My last post got a whopping 1 reply, and the one before that I think got none. Now that there is almost zero interest in the project - I might want to keep it that way for a while: )
Posted by DarkFalzX at 6:18 PM