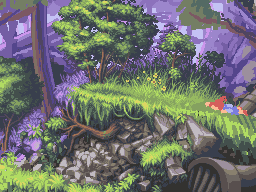 Not much in terms of asset updates, however, over the last two days I have solved a large-ish issue with the game. You see - Game Maker is a slow, high-level script. Its math computations are laggy, and its asset management is rather inefficient. But hey! I'm not really complaining there. My biggest issue with it, however, its abysmal handling of tiles. Not only that the built-in tile editor is completely worthless, and doesn't allow to utilize even a fraction of GM's own tile manipulation abilities, but the output algorithm is incredibly inefficient. It appears it blits every tile in the room on each redraw - with larger tiles most people use - it's not really a problem, but since I had to use DS-compatible tilesets of 8x8 elements the game ran like crap on lower-end computers.
From the day I got my netbook I've been frustrated with the game's awful performance on it. Even on "high power" mode the game ran at barely 20 fps. I tried to solve the problem several times before, but could never pinpoint the fps sink, always suspecting my own code as the culprit. A couple days ago I have finally discovered the tile issue, and have quickly devised a solution.
A short script was added to the hud object. At the start of each room a global surface is created, views are turned off and the entire room's tilemap is blitted to that surface once. The tilemap is then deleted from memory, and replaced with an object that draws only the part of the surface currently visible on screen... BAM! - 30% speed-up!
I couldn't be happier: )

Oh - and other news - I have dug up issues 2 and 3 of the old LOI "comic" I drew when I was 11 years old... Not even sure I should make that travesty public, as it is a genie of infinite shame: )

Posted by DarkFalzX at 7:02 PM