Ultionus A Tale of Petty Revenge 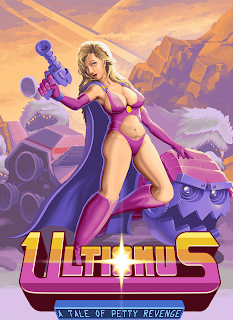 While LOI is being completed - I have something to ease your anticipation. A brand new, complete game in fact!
Ultionus is inspired by the arcade games released for 8 and 16-bit home computers in late 80s and early 90s. Particularly games like Halloween Harry, Phantis, Astro Marine Corps and Jill of the Jungle had a lot of influence on the game's overall look and design simplicity. Though the gameplay in different stages varies between three major styles - shmup, autoscrolling shooter, and jump-n-shoot arcade - all three styles are easy to pick up and play, though tough as hell nevertheless.

The game's release is currently being finalized on Desura and Humble Store, and will be available for $10. It is also up on Steam Greenlight (so please - go vote for it if it's something you'd like). The game will also be available for free to all LOI supporters who pledged $10 or more.


Initially only Windows and a Linux versions will be available, but a Mac port is highly possible if only I could get my hands on a Mac computer.
An Ouya port is also complete and is waiting for YoYo games to implement the IAPs.
The game features music by Jake "Virt" Kaufman and Luke "A_Rival" Esquivel.
Posted by DarkFalzX at 1:47 AM